The Sun's farside joins the party!


On 26 and 27 March, extreme ultraviolet (EUV) imagery by the STEREO-A spacecraft showed a dynamic prominence near its northeast solar limb. Solar prominences are clouds of charged particles ("plasma") above the solar surface squeezed between regions of opposite magnetic polarity. Being cooler and denser than the plasma underneath and their surroundings, they appear as bright blobs when seen near the solar limb. STEREO-A is currently trailing the Earth by about 54 degrees, hence the prominence being at its east limb clearly shows this was a farside event as seen from Earth. At its maximum extent, the projected length of the prominence reached at least 360.000 km, that is basically the Earth-Moon distance. Also, it towered high enough above the solar surface to be even visible from the Earth, in part due to its relatively high latitude (between approximately 35 and 65 degrees). The pictures underneath show the prominence activity on 26-27 March, one as seen by STEREO-A (EUVI 304, i.e. at temperatures near 80.000 degrees), the other as seen by PROBA2 (SWAP 174, i.e. at temperatures near 1 million degrees). Clips are available in the online version of this newsitem at https://www.stce.be/news/520/welcome.html 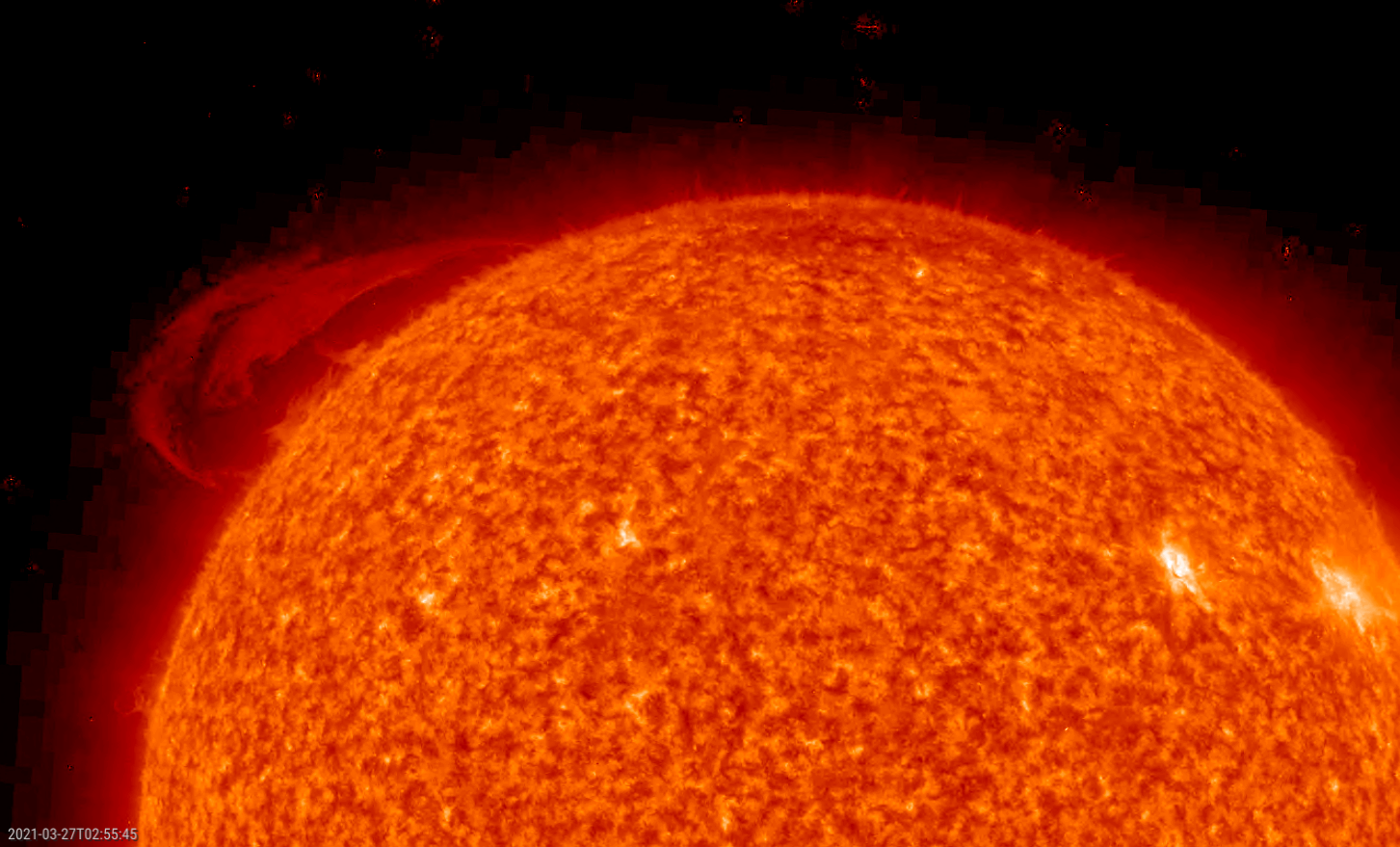 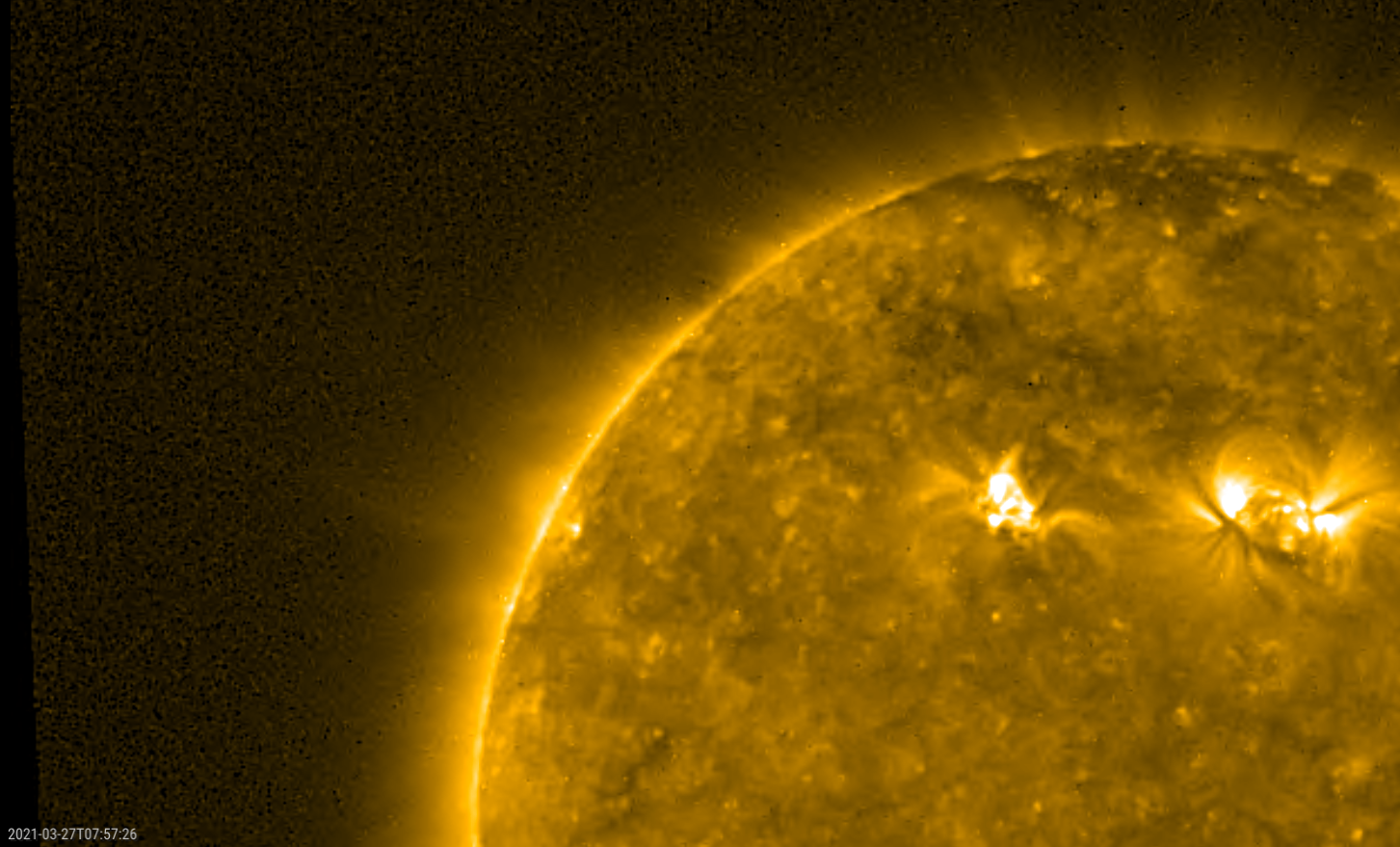 Contrary to the impressive prominence activity, the associated coronal mass ejection (CME) was a lot less spectacular. Coronagraphs from both STEREO-A and SOHO show only a very faint and ragged structure leaving the Sun. Seen from Earth, the CME was directed mostly towards the east and northeast, obviously without any earth-directed component. The bright dot in the coronagraphic images by SOHO to the south of the Sun, is the planet Venus, which had its superior conjunction with the Sun on 26 March (meaning it was located directly at the other side of the Sun as seen from Earth). 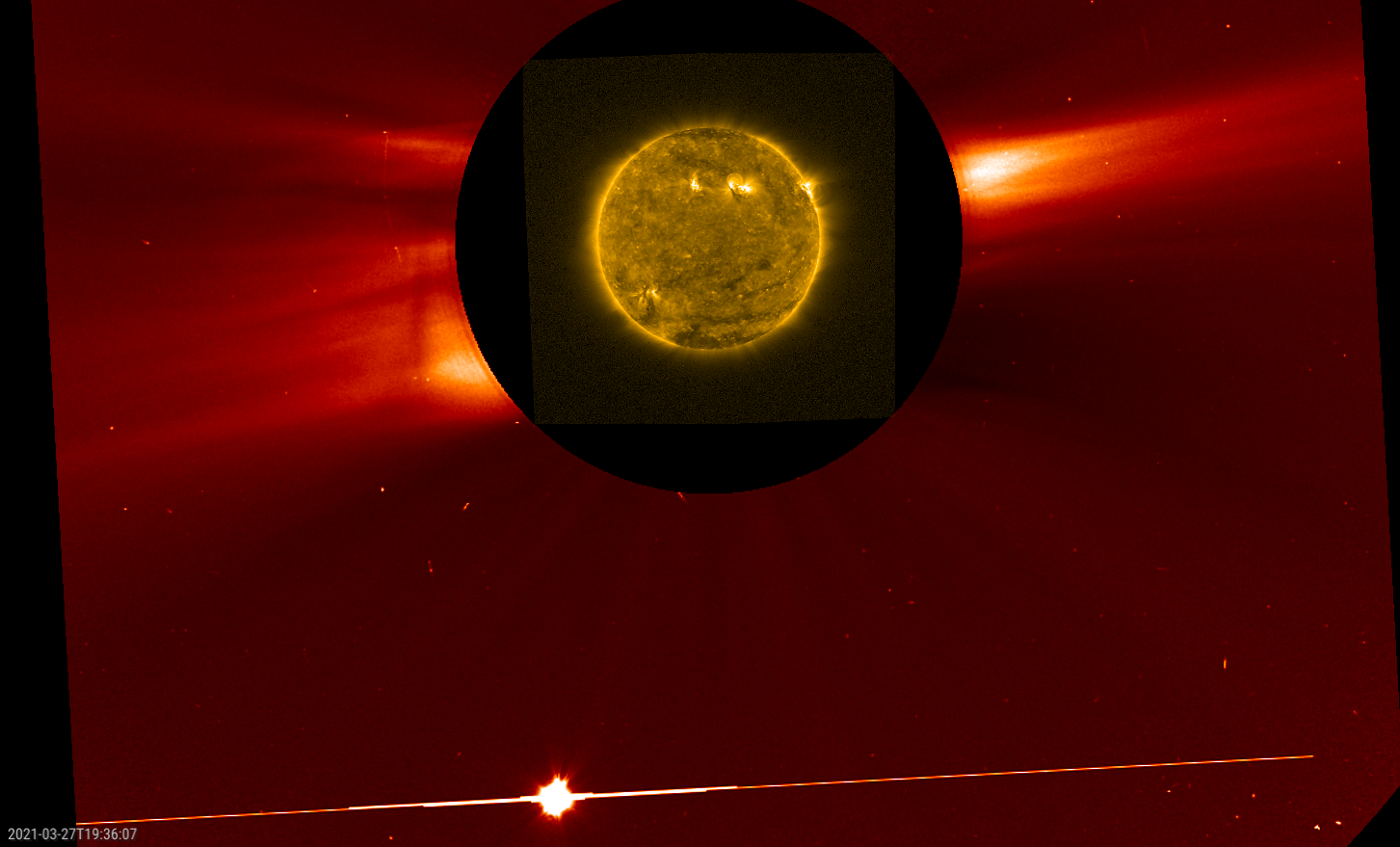 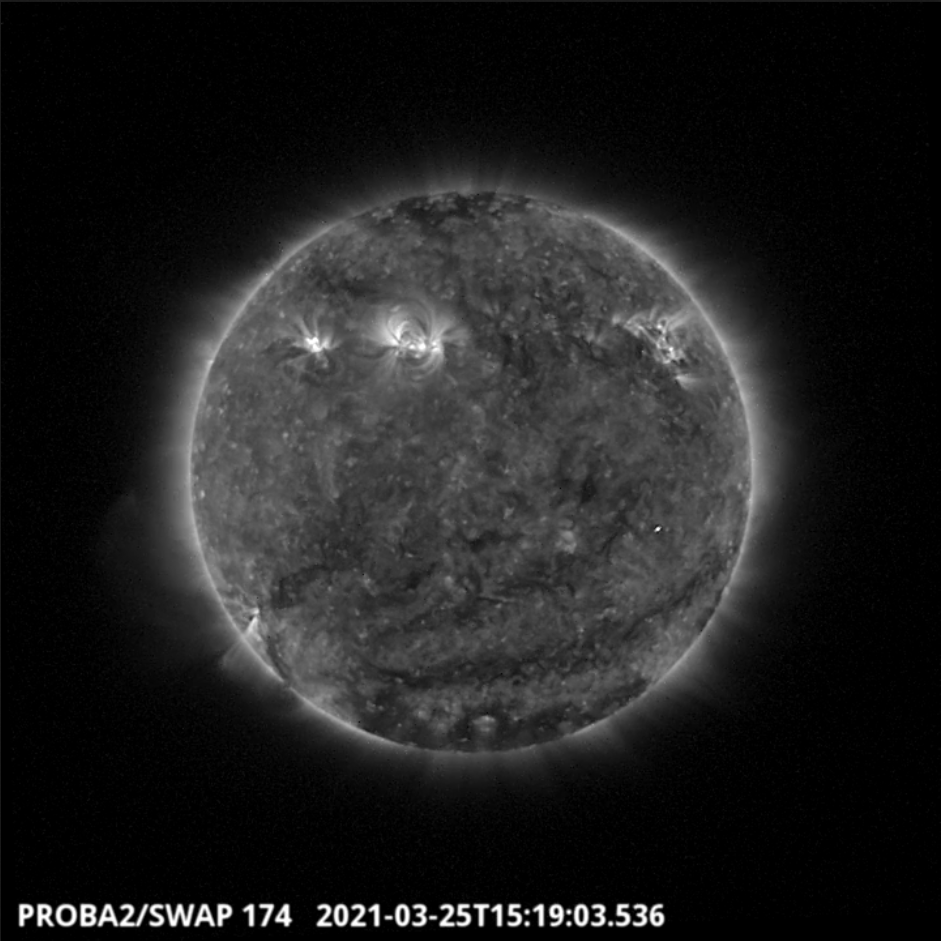 The largest flare of the week, a B8.3 flare associated with NOAA Active region 2812, was observed by SWAP and LYRA on 2021-Mar-25. The flare occurred in the north-eastern quadrant of the solar disk, as shown in the SWAP image above taken at 15:19 UT.
Find a movie of the event here: https://proba2.sidc.be/swap/movies/20210325_swap_movie.mp4 (SWAP movie) 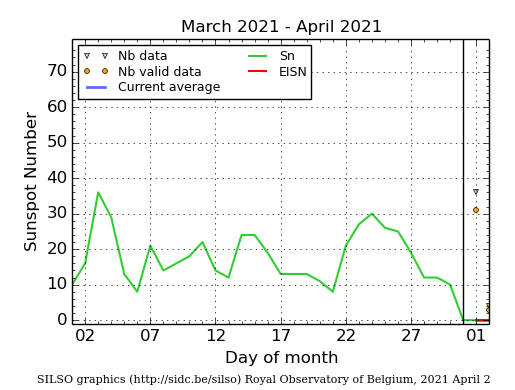 
Solar wind conditions were effected from 20/3 until 25/2 by a high-speed stream associated with the negative polarity coronal hole. The highest solar wind speeds were 680 km/s and were recorded on 20/3 and 21/3. The speed gradually decreased from 22/3, reaching 340 km/s on 27/3. The magnetic field strength varied between 1 nT and 7 nT from 20 to 27/3. The Bz showed a similar variation with values varying from -7 nT to 7 nT in this period.
Geomagnetic activity reached minor storm levels (Kp 5) on 21/3 due to the high-speed stream arriving at the beginning of the week.


Two Interplanetary Coronal Mass Ejections arrived to the Earth: on 24/3, corresponding to a CME from 20/3 and a second one arriving on 27/3, related to the CME from the 22/3. They both caused active geomagnetic conditions (KDourbes and Kp = 4). The first one caused even a minor geomagnetic storm at the planetary level: Kp=5.


The Space Weather Briefing presented by the forecaster on duty from March 21 to 28. It reflects in images and graphs what is written in the Solar and Geomagnetic Activity report. 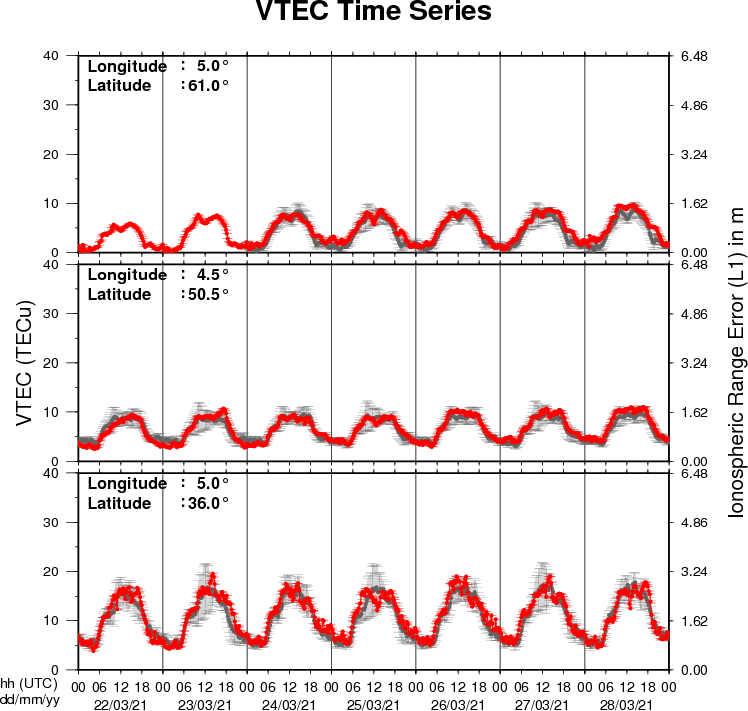