When NOAA 13105 rounded the southeast limb on 19 September, it became visible as a moderately sized sunspot group showing quite some complexity in its inner and trailing portions. However, it quickly became clear that its magnetic structure was a lot simpler, and over the next few days, its number of sunspots as well as their size gradually declined. This can be seen in the white light images underneath taken by SDO (https://sdo.gsfc.nasa.gov/data/aiahmi/ ) on 22, 24 and 26 September highlighting the decay of the sunspots in this active region. In the end, NOAA 13105 produced only a few C-class flares.

In the wake of NOAA 13105 developed another sunspot region, NOAA 13107 (see images above). It was quite bright and dynamic in extreme ultraviolet (EUV) images when it started its transit over the solar disk on 20 September. It has produced 1 low-level M-class flare so far, an M1 flare ("medium-size") on 21 September at 07:02UT, as can be seen in the annotated SDO EUV image underneath. Unfortunately, also this region started decaying in the subsequent days. 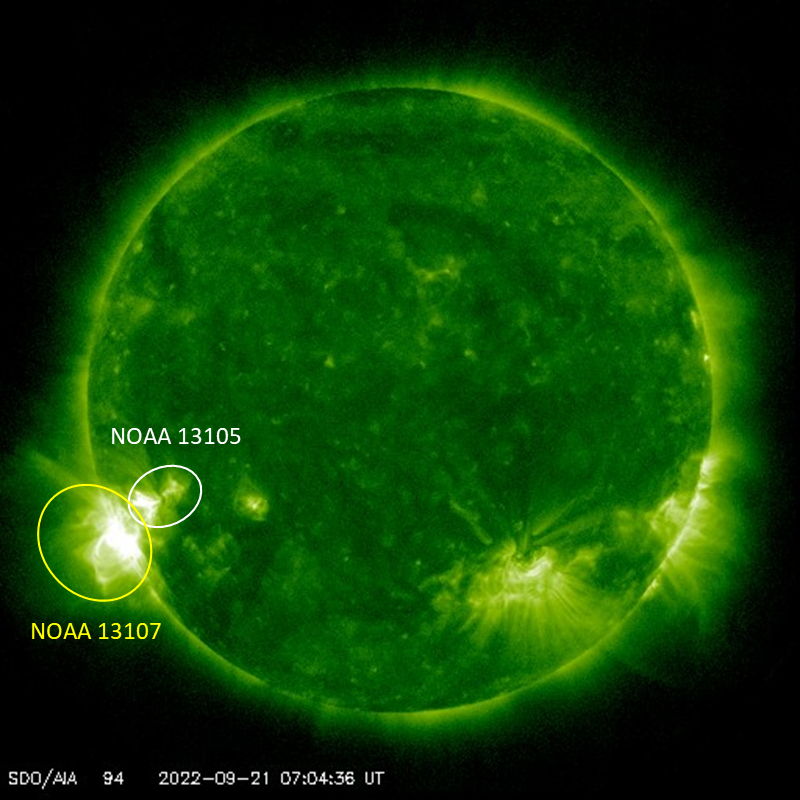 Both active regions formed a nice sunspot pair during the Open Doors at the Royal Observatory of Belgium (ROB) on 24-25 September. The picture underneath was taken by the white light solar telescope of USET (Uccle Solar Equatorial table - https://www.sidc.be/uset/) early on 25 September. Unlike the Open Doors in 2018 which was close to the solar cycle minimum, there was no need for the guides to point out the sunspots to the visitors this time! 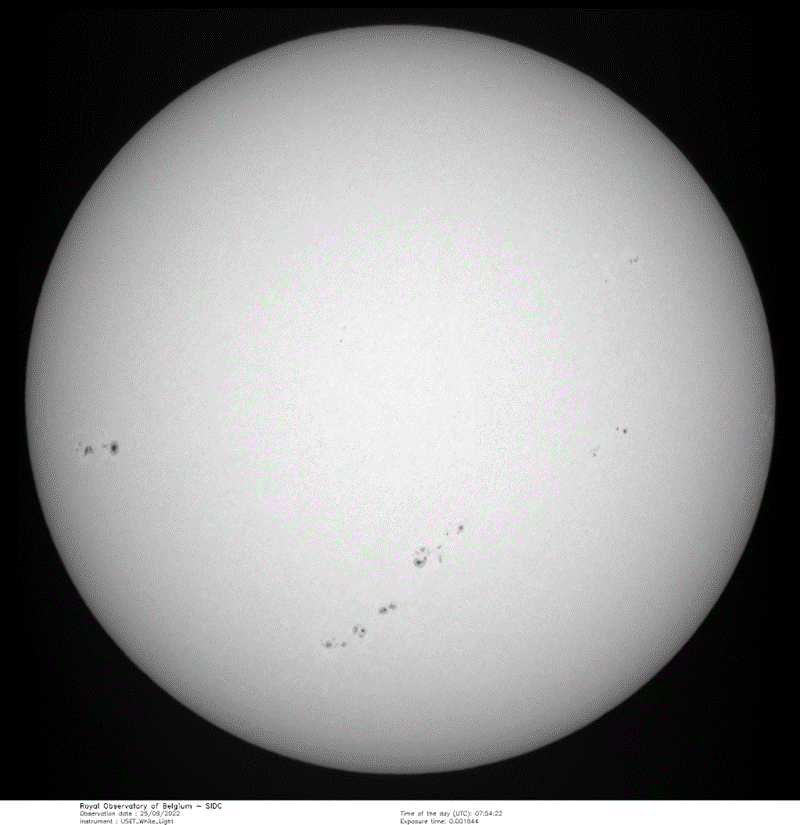 Despite the not so overwhelming flare activity, plenty of coronal mass ejections (CMEs) were observed during the week. Alas, no luck with these features either. Most of them occurred close to the solar limb and thus had no earth-directed component at all, or at most could deliver only a glancing blow to the Earth's magnetic field. Underneath a few of the more stunning CMEs observed during the second half of last week (SOHO/ LASCO C2 - https://soho.nascom.nasa.gov/ ), showing the classic “three-part” structure of a CME consisting of (1) a bright front; (2) a dark cavity; and (3) a bright, compact core. However, not all CMEs show this typical 3-part structure, and -when directed to Earth- the substructures are often very difficult to distinguish in the recorded solar wind data. Obviously, this is an active field of research in which also scientists of the ROB are deeply involved.


The week started with just two regions on the disc. NOAA region 3100 was rotating off the disc and was inactive while NOAA active region 3102 produced several C flares and eventually one M1 flare in the morning of September 20. Afterwards the activity was dominated by regions rotating onto the disc in the East. In the southern hemisphere before being numbered the combo of NOAA active regions 3105 and 3107 made their entree with an M1 flare in the morning of September 21, and continued to produce several C flares. On September 23 in North East NOAA active region 3110 rotated onto the disc while producing high level C flares and later in the day the largest flare of the week: an M1.7 flare. On September 24 into September 25 we saw large C flares from both NOAA 3110 and NOAA 3107 before they simplified and became more quiet.

Starting from September 22 a series of CMEs were visible in coronagraph images.
From around 9:24UTC September 22, there was a CME visible in SoHO/LASCO C2 data propagating towards the West with an angular extent of around 130 degrees. It was faint and slow and was not picked up by the CACTus tool. Around the same time some AIA EUV images showed slow dimmings and brightenings around the center of the disc, South of Catania group 45 (NOAA active region 3109) but it remained unclear if that is related. No arrival forecast was produced for this event as it was either not Earth directed or judged to be probably not identifiable in in situ measurements.
An eruption around noon September 23 of a filament stretching from Catania group 35 (NOAA active region 3102) towards the West was associated with a partial halo CME as visible in SoHO/LASCO and STEREO-A coronagraph data. It was first visible in SoHO/LASCO C2 data at 13:48UTC and propagates mainly towards the West with an angular extension reaching around 180 degrees. The projected speed was measured as just over 500 km/s and estimates of the speed along the line of propagation are up to 600km/s. Associated to the M1.7 flare a CME was launched towards the East from near the East limb and was visible in SoHO/LASCO C2 images from around 18:12UTC September 23 with a projected speed of 1500km/s. It had an angular extent of around 160 degrees. Some more CMEs occurred in coronagraph images afterwards, but all are judged to be too narrow or off the Sun-Earth line to reach Earth.


At the beginning of the week in situ measurements showed waning fast speed stream solar wind conditions. On September 22 a change was seen in the polarity of the interplanetary field changing from negative (towards the Sun) into positive (away from the Sun). This was followed by a very mild influence of a high speed stream from the equatorial coronal hole with solar wind speed touching just barely at 500 km/s. By the end of the week solar wind speed was at a low 300 km/s.


Geomagnetic conditions were mostly quiet to unsettled throughout the week with some isolated active periods.


Solar flare activity fluctuated from low to moderate during the week.
In order to view the activity of this week in more detail, we suggest to go to the following website from which all the daily (normal and difference) movies can be accessed: https://proba2.oma.be/ssa
This page also lists the recorded flaring events.


If any of the linked movies are unavailable they can be found in the P2SC movie repository here: https://proba2.oma.be/swap/data/mpg/movies/. 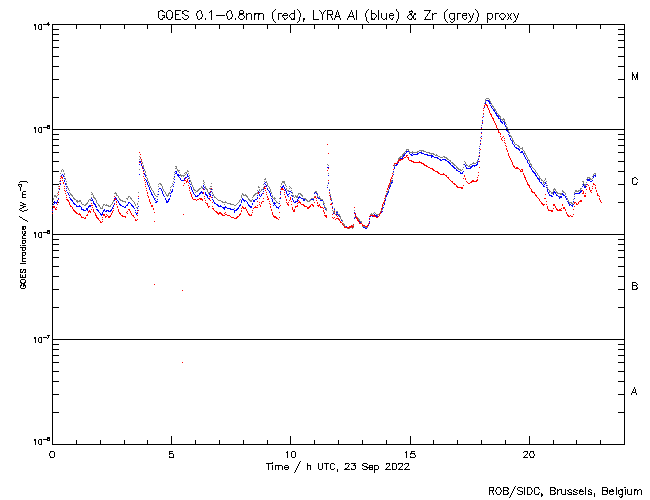 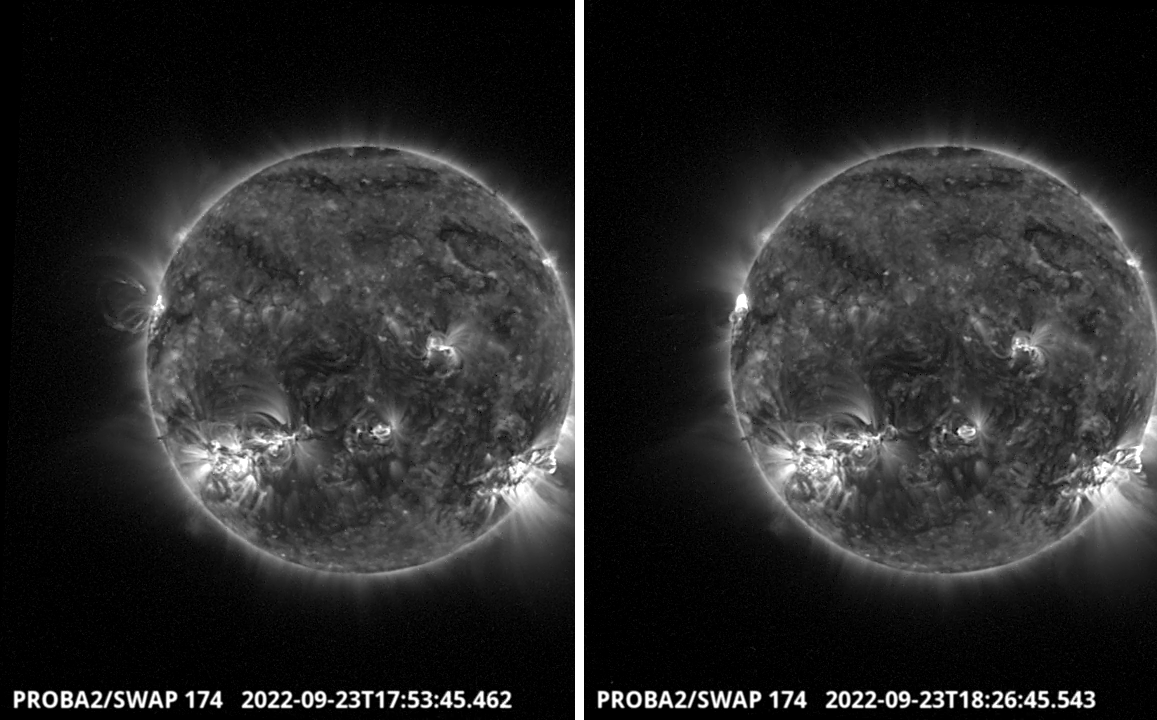 The largest flare of the week, an M1.7 flare, was observed by SWAP and LYRA. The flare was associated with NOAA AR3110, as it was rotating over the eastern limb on 2022-Sep-23. The flare was associated with a large filament eruption and a CME. The bottom panels show SWAP observations of the eruption and of the flare around its maximum (peak at 18:10 UT).
Find a SWAP movie of the event here: https://proba2.sidc.be/swap/movies/20220923_swap_movie.mp4. 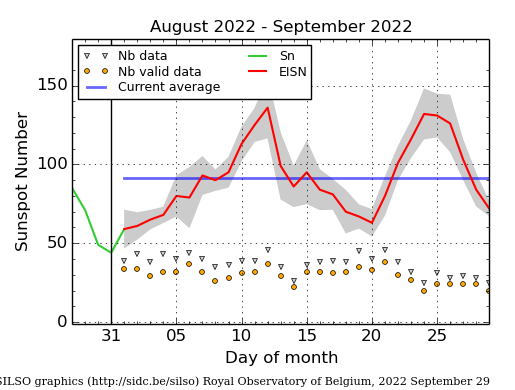 The daily Estimated International Sunspot Number (EISN, red curve with shaded error) derived by a simplified method from real-time data from the worldwide SILSO network. It extends the official Sunspot Number from the full processing of the preceding month (green line), a few days more than one solar rotation. The horizontal blue line shows the current monthly average. The yellow dots give the number of stations that provided valid data. Valid data are used to calculate the EISN.


The Space Weather Briefing presented by the forecaster on duty from September 18 to 25. It reflects in images and graphs what is written in the Solar and Geomagnetic Activity report: https://www.stce.be/briefings/20220926_SWbriefing.pdf 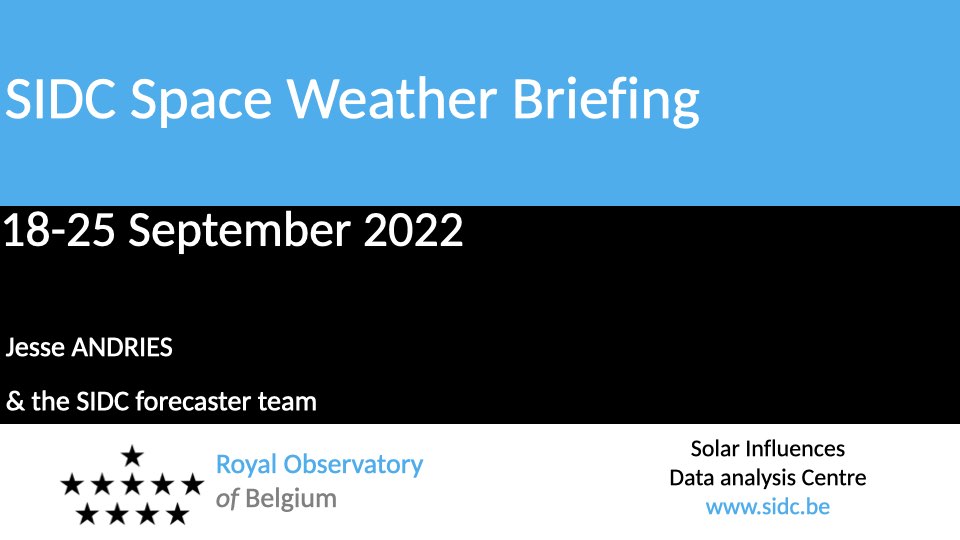 
Check out our activity calendar: activities and encounters with the Sun-Space-Earth system and Space Weather as the main theme. We provide occasions to get submerged in our world through educational, informative and instructive activities.
If you want your event in our calendar, contact us: stce_coordination at stce.be
* October 11, Webinar: Putting the FAIR principles into practice: the journey of a GNSS data repository, GNSS@Royal Observatory of Belgium
* October 20, Job vacancy EUI onboard Solar Orbiter - last day for submission
* October 24-28, 18th European Space Weather Week, Zagreb, Croatia
* November 21-23, Space Weather Introductory Course - onsite, by the STCE, Brussels, Belgium - fully booked
* December 5, 6, 8, 9, Space Weather Introductory Course - online, by the STCE, zoom - fully booked
Check: https://www.stce.be/calendar 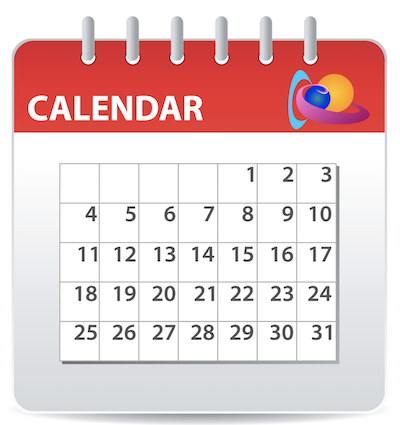